Have a Le Pho? 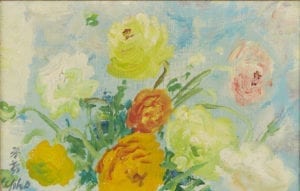 Le Pho was born in Vietnam in 1907. As a child, he was constantly finding opportunities to make art. As the son of the Viceroy of Tonkin, he had the opportunity to study art at the newly established Ecole des Beaux-Arts in Hanoi under Victor Tardieu (1870-1937), a well-respected French painter. In 1931, he traveled to France with Tardieu, where he studied at the Ecole des Beaux-Arts in Paris on a scholarship. He then traveled to Italy to do research, also visiting the Netherlands and Belgium in his tour of Europe.

After returning to Vietnam, Le Pho became a professor at the Ecole des Beaux-Arts in Hanoi. During his professorship, he decided to continue his education by making trips to China to study and make art. While in China, he studied traditional Chinese sculpture, visited museums, and even had the opportunity to paint the Emperor and Empress.

In 1937, he was sent to Paris to work on the Indochina Pavilion at the International Exposition of Art and Technology in Modern Life. He stayed in France after the Exposition, where he found great success as an artist. His first solo exhibition was in 1938, and soon after, his work began getting international exposure. His works were widely distributed, particularly in the United States because of an exclusive contract he signed in 1964 with Wally Findlay Galleries, an American company.

Despite his expatriate status, Le Pho kept close ties to his homeland. He was active in the Vietnamese community in Paris, and worked with Vietnamese dignitaries and intellectuals to advocate for better treatment of the colonized Vietnamese people. His ties to his homeland are also evident in his subject matter. His paintings featured women and flowers, which he depicted in ways influenced by Vietnamese traditions and aesthetics.

Or email us at Info@RevereAuctions.com

Click below and one of our representatives will contact
you to discuss the value of your item.