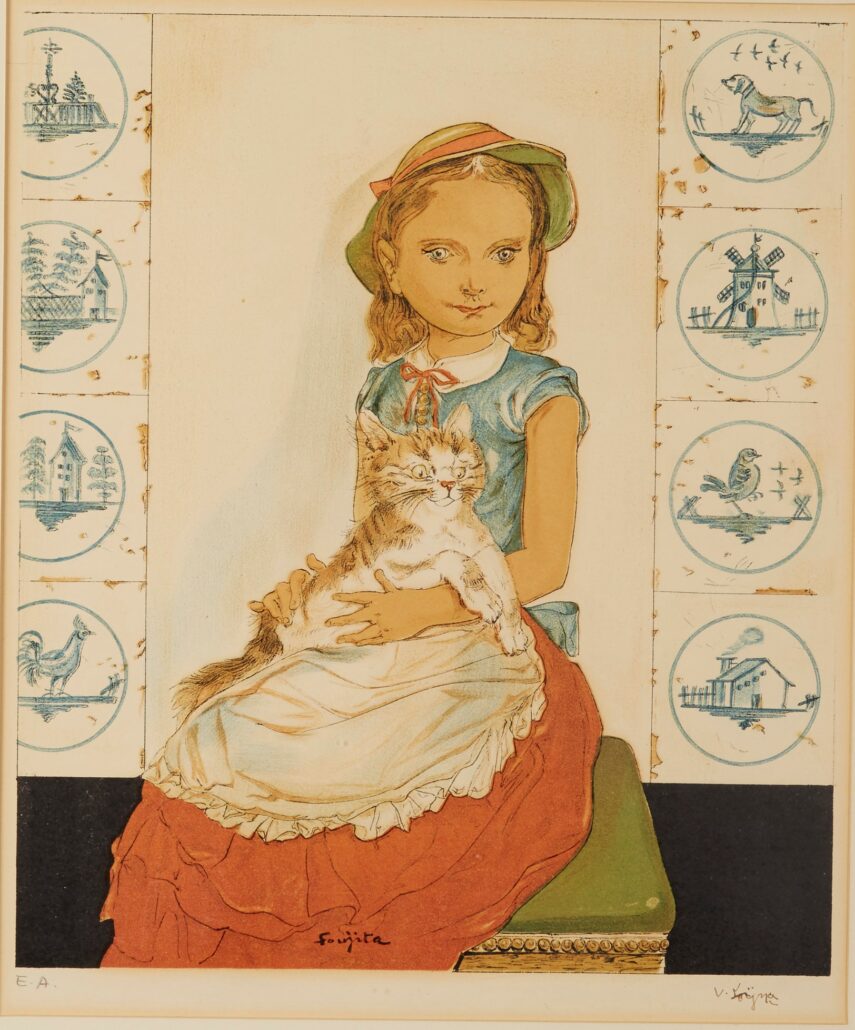 Tsuguharu Foujita was known not only for his art which blended techniques from around the world, but also for being quite the fashion icon of his time. His round glasses, gold hoop earrings, and boxcar mustache perfectly suited his vibrant personality. Here, we’ll cover a quick biography of the artist, what artistic mediums and subjects he was known for using, and the value of his works. 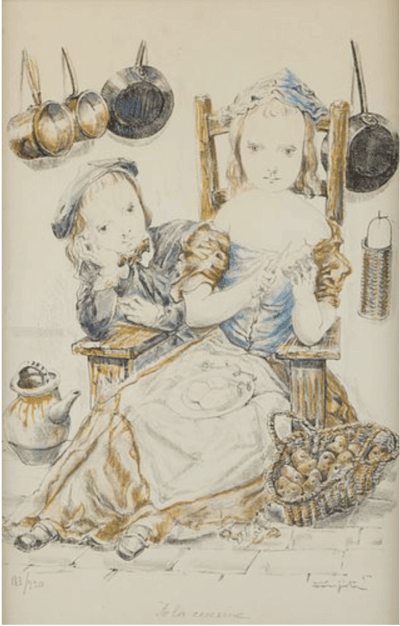 Tsuguharu Foujita (also known as Léonard Tsuguharu Foujita) was born in Tokyo, Japan, on November 27, 1886, to an upper-class family. From an early age, Tsuguharu learned French and had ambitions to be a successful artist in Europe. In 1913 he moved to Paris, where he spent the majority of his life and cultivated an artistic circle that included Pablo Picasso, Henri Matisse, and Amedeo Modigliani in the creative and bustling Montparnasse district. Tsuguharu Foujita thrived in Paris early on, selling out his debut solo exhibition of 110 pieces on the first day.

In Paris, he became known for hosting luxurious parties with his creative friends and models, who served as his muses. The extravagant lifestyle caught up with him when he was faced with a bill he could not pay and had to leave Paris. After a brief return to Tokyo at the start of World War II, Foujita traveled to the United States before eventually moving back to Paris for good. He became a French citizen in 1955 and even converted to Catholicism with the baptismal name of Léonard in 1959.

Tsuguharu Foujita is known for his unique artistic style that blends Eastern and Western painting characteristics due to his ties to both Japan and France. His portraiture has a European touch with elements and lines reminiscent of Japanese art. For Tsuguharu Foujita, cats were among the most beautiful, gentle, and graceful creatures, and he loved drawing them. He was also inspired by women and the female form, so many of his paintings were of nude women, often with cats.

Tsuguharu Foujita’s love of cats was clearly apparent from his vast collection of cat drawings and prints. He loved that they could be both wild and domestic. But it wasn’t just Foujita who had a passion for cats. Cats are a symbol in Japanese art and culture of good luck and fortune. It’s no surprise that Foujita is just one of many Japanese cat portrait artists throughout history. 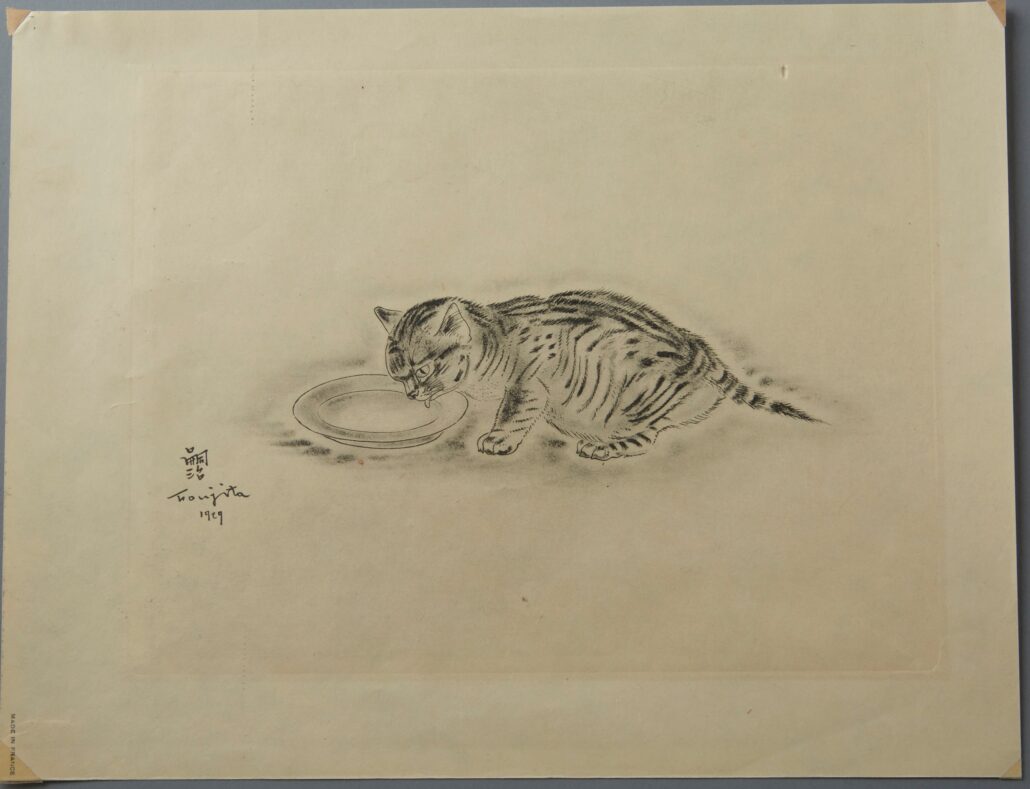 A Book of Cats (Rare Collection of Illustrations)

Due in part to the desirability of Léonard Tsuguharu Foujita cat drawings, the artist published a limited-edition book of cat drawings in 1930. The book is highly sought after and features twenty etched plate drawings of realistic cats, each one named and with a corresponding poem.

Traditional Japanese line techniques stood out in all of his artwork, especially Foujita’s cat prints. To achieve this technique of muted colors and bold black lines in his work, Tsuguharu Foujita took advantage of a range of mediums and developed a glazing technique for a pearl-like finish.

Many Léonard Foujita cat drawings use charcoal on paper because of its ability to shade and create smoothness in the drawing. He often combined charcoal with other mediums in his drawings.

Tsuguharu Foujita utilized Japanese materials such as ultra-fine brushes called menso and an ink called Sumi. Sumi is often used in calligraphy and allows for different concentrations of black ink by dilution with water. Both of these tools combined allowed Foujita to vary the thickness and shade of his black outlines.

A lead pencil was used in finer, more delicate drawings on paper and often combined with charcoal for the shading. Many of these works were portraits of women or small children.

When Foujita wanted to infuse color into his drawings, he would employ watercolors to give that soft color that Japanese art is known for. To achieve the black outlines, he would use a felt-tip pen or black ink to create his famous Japanese paintings of cats and other works.

Tsuguharu Foujita attended the Tokyo National University of Fine Arts and Music, where he studied Western painting and received his diploma in 1910. Following his childhood dream of becoming a highly successful painter in Europe, Foujita moved to Paris and quickly rose to prominence in the modern art scene for his depictions of the female body and real cats.

After a battle with cancer, Foujita died in 1968 at age 81 in Zurich, Switzerland. He was eventually buried at the grounds of the Foujita Chapel in Reims, France, for which he designed and painted the interior. 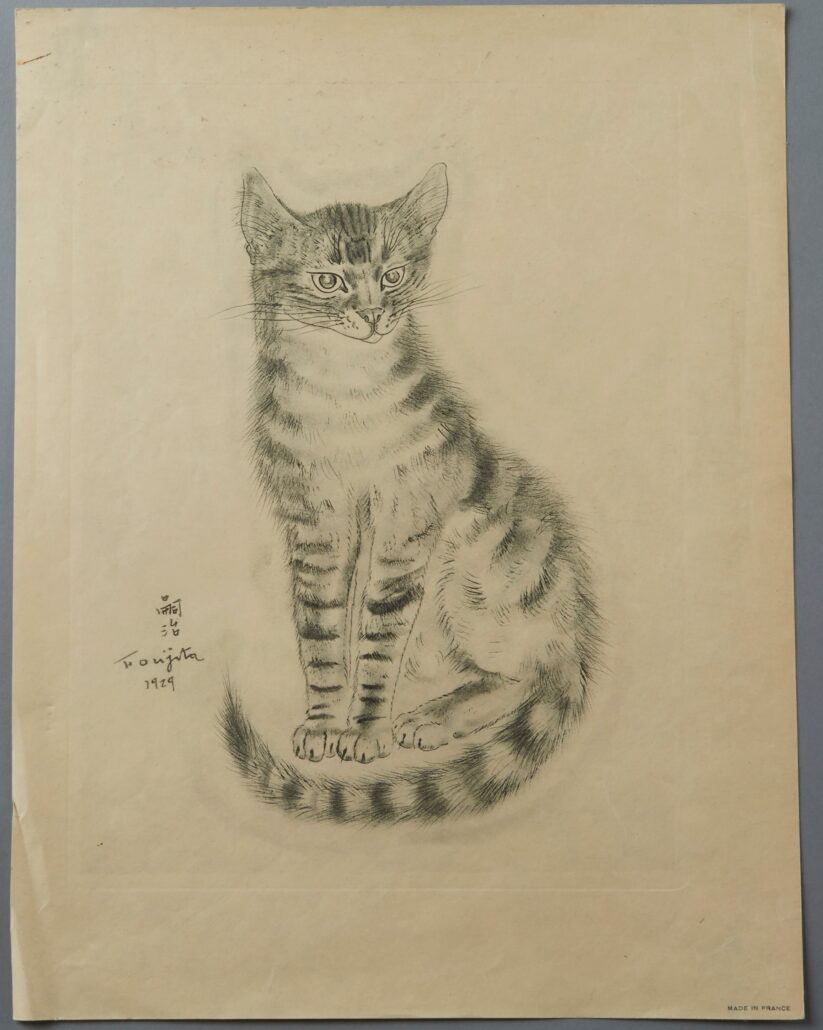 Tsuguharu Foujita saw great success as an artist while he was alive and continues to do so even more after his death. Any Foujita print or original drawing, especially his A Book of Cats, will garner lots of interest and a high selling price. There is some variance in T. Foujita painting values depending on the type of work, which we outline below.

Like most artwork, there are a few key indicators used to determine the value of the work.

Curious about the value of your Tsuguharu Foujita piece? Reach out to Revere Auctions today for an appraisal.

Foujita cats prints value remains strong based on previous selling prices and how central cats were to his artwork. Some of the other more famous and valuable pieces of art by Foujita include his portraits of women and his self-portraits. Take a look at Revere Auctions’ current selection of Tsuguharu Foujita cats and their values. Below we’ll cover some of the most noteworthy sales of Foujita’s work. 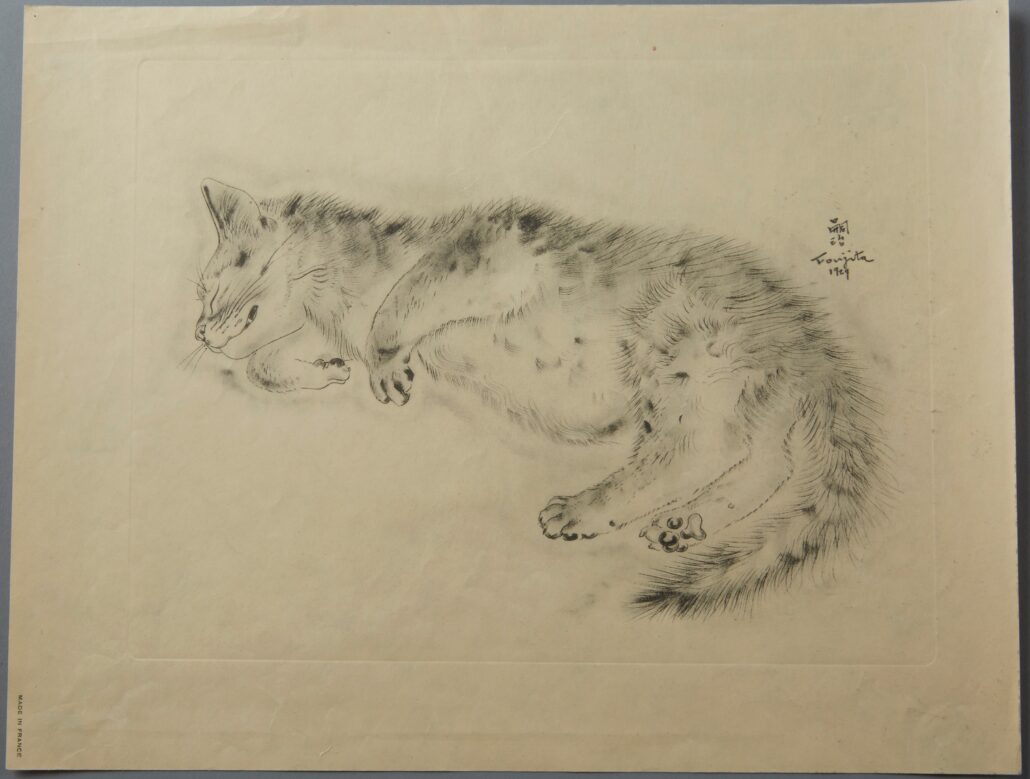 Tsuguharu Foujita Book of Cats is the artist’s most notable and valuable collection of work. In 2014, the book was placed in the top 500 rare books ever when a copy sold for $77,500. The Foujita cats are discernable by their careful detail and realism. The book is still considered one of the most coveted on cats ever made. At Revere Auctions, various prints of these Foujita cat prints have sold for as low as $700 and as high as $1,050.

Painted in 1949, Tsuguharu Foujita’s Cafe showcases the artist’s mastery of oil painting on canvas with a portrait of a young woman seated at a cafe booth.

On the higher end of Tsuguharu Foujita price points is his Self Portrait Series, in particular his Self Portrait with Cat. This color woodblock print was completed in 1929 and features the artist with a paintbrush in his hand and a cat resting on his shoulder.

This 1927 Japanese cat painting depicts a cat’s head peering over a table at a number of sewing supplies, including a spool of thread, pin cushion, and measuring tape. Couturier is a French word for dressmaker, so this Foujita cat is being cheekily referred to as a dressmaker.

In the 1950s, inspired by the innocence and purity of children after a devastating World War II, Leonard Foujita painted a number of portraits of little girls holding dolls. While the girl is different in each painting, they all have pale skin and wear an off-the-shoulder dress.

Another series in Foujita’s post-war collection is Les Deux Soeurs, the most notable of which is an oil on canvas painting of a young sister resting in the lap of an older sister.

Similar to Les Deux Soeurs but named in English, Tsuguharu Foujita’s Two Sisters is a 1959 portrait of two young sisters in a semi-embrace.

Foujita’s Girl in the Park is a 1957 oil painting on canvas that features two of his favorite subjects, a young girl and a cat. The theme of youthful innocence is continued here in a park in Paris.

In this piece, Foujita painted two female dancers dressed in white ballet tutus. He gracefully shows them mid-dance with arms in the air in motion and pointed toes.

An earlier work by Foujita, this 1917 painting is a foray into a more expressionist style of art. La Vie features a woman in a deep navy dress bowing her head in defeat with a calm and sandy beach in the background.

Like many artists, there are variations in Tsuguharu Foujita’s signature, and not all works were signed. Some contain his signature in Japanese with his signature in English and year stacked beneath, but some are signed with just a simple letter “F” or his last name only.

If you’d like to know your Tsuguharu Foujita cats print value or have another piece of his work that you’d like to sell, the first step is to have an appraisal done by a professional art dealer. Take the time to research your options, as not all dealers are created equal. Due to the value and significance of your piece, you’ll want to work with someone you can trust. You’ll also want to work with a company that knows how to market your piece to obtain the highest possible selling price.

Revere Auctions is Minnesota’s premier auction house of Tsuguharu Foujita pieces and beyond. Our team of experts has dedicated Asian Art specialists available to you to answer all of your Tsuguharu Foujita questions. We work with multiple online bidding platforms to secure the highest selling price and make the entire process transparent and easy.

Check out our full list of services and reach out to get started today! If you have artworks by Léonard Tsuguharu Foujita you wish to have appraised or sold please contact Revere Auctions or at 612.440.6985.

Like what you see so far from Tsuguharu Foujita? Explore more works from him, and discover similar artists!

A traditional Japanese painter known for painting, drawing, and cat portraits in the Ukiyo-e style.

An American illustrator and printmaker who utilized Japanese and Chinese wood blocking techniques to create works of women and landscapes.

A Japanese artist known for his paintings of cats, Shunso utilized the traditional lines of the Nihonga genre.