A bus from Chicago pulled into a Minnesota snowstorm. Early fifties. A young man cast forth, hooded in an opera cape. From Chicago’s theater and street scenes, Gordon Locksley had arrived in Minneapolis.

In time, Gordon Locksley along with business and former personal partner Prof. George Shea would create the modern art scene in post-war Minneapolis. As I write this memoir, I recall Gordon with his charisma and drive, meanwhile more reserved George Shea, professor of Japanese literature, remains remembered for his refined taste.

Fifties Minneapolis was a comfortable well-to-do city along with its twin, Saint Paul, serving a large hinterland – fluid class lines, while progressive, and literate. Robust theater had replaced its Vaudeville era, also with a distinguished opera, important museums, and a world class orchestra.

I admire how Gordon slid into and molded the changing local art scene, mid to late twentieth century. His timing was fortuitous, promoting a new art paradigm with the energy flow of gay culture through personal contacts, and as this culture was positioning toward mainstream.

This new art scene was deftly carried into sales. The abstract expressionist era of Willem de Kooning and the tapping-one’s-subconscious methods of Robert Motherwell and George Morrison were being overtaken, first by Pop, then by the Minimalists.

Andy removed art’s authority: “Anyone can make this.” “There is nothing to it. Nothing there.” Yet the market loved it. His silkscreen 200 One Dollar Bills brought $43.8 million dollars at Sotheby’s. A silkscreen, and with duplicate serial numbers!

And Gordon was his dealer. Featuring Andy with riotous parties.

Gordon sped up the art scene. Parties with live bands, wild costumes, dancing, press articles, TV. Cristo’s wrapped nudes in their Lowry Hill home. Their unit in this neo-Renaissance mansion comprised the lower floor. It was centered around a grand balustraded staircase, a cameo for presenting famous guests.

A second theme of Gordon’s art was stripping art’s attributes: The Minimalists They did not merely pare down art’s form as did Brancusi, Malevich, or Isamu Noguchi. Rather they forced removal of art’s attributes.

“What a pleasure to hear your voice!” as Gordon would answer my phone calls. Yet I don’t recall my first meeting Gordon. Once at the Red Owl grocery noticed Gordon and George looking at me. Likely I knew who they were from TV or newspapers. Also, Gordon was a good friend of my mentor, prominent antiques dealer Joe Walton. Soon I got to know Gordon, while my friend Denny McGann sought Gordon’s advice on his idea of a lighted box with two-way mirrors.

Upon knowing Gordon better, I learned aspects of modern art and on art dealing. “Always return favors.” Regarding Dan Flavin’s neon tube piece, when I asked what this was about “What better way to say Fuck You!!” he answered. Yet I missed some pointers like that of a proposed a trade of an Ad Reinhart drawing for a small male nude bronze (then and now worth around $1,000, and the Ad Reinhart? Never mind.)

Around 1977 I was invited by Gordon and George to attend an art opening of John Chamberlain’s crushed automobiles. Crushed dreams? Arriving in my vintage Bentley may have been risky as Cunningham had once bought a collection of pristine autos from a museum and proceeded to strip them of interior, engine, parts. Meanwhile I had asked Gordon whether my casual dress was OK; he said he only required a jacket being an art dealer. I was fine. He always cared more for his friends than for their appearance. He was intensely loyal to friends.

My greatest gifts from Gordon occurred at the Mia dinner honoring him. A friend asked Gordon whether he knew me: “From the beginning of time!” he exclaimed. And later Gordon complimented an article I had written on Andy Warhol. 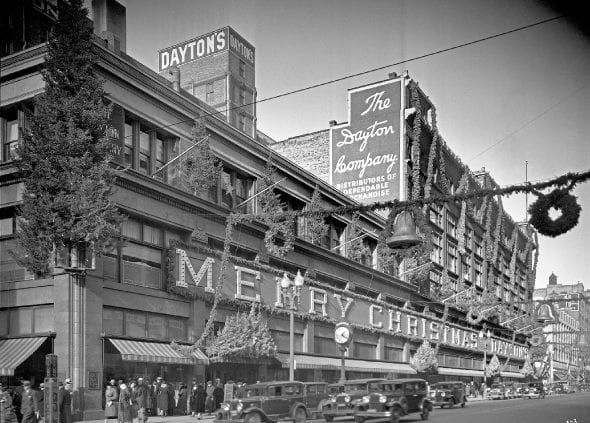 During its tenure in Minneapolis, Dayton’s Gallery 12 was a powerhouse in the American contemporary art scene. While it was originally greeted with disdain by the art world at its founding in 1964 because it was a department store gallery, it soon gained a reputation as a serious player in the art scene, showing works by the biggest names in the contemporary art world, such as Andy Warhol, Roy Lichtenstein, and Jasper Johns. Dayton’s Gallery 12 played a unique role in shaping the Midwest art scene, and the American art scene more broadly.

It kickstarted the contemporary art market in the Midwest, a market that many critics had doubted existed. Dayton’s Gallery 12 was strengthened by the unique opportunities it provided. Dayton’s Gallery 12 was able to exhibit large collections with huge ranges of works in ways that would not be available elsewhere due to space and other concerns, allowing artists–and even gallery owners such as Leo Castelli–to display large volumes and varieties of works, creating a unique experience which benefited both artists and local viewers.

OR: an Introduction (Jud Fine)

Revere Auctions is dedicated to finding and preserving these important works from Dayton’s Gallery 12.