Japanese artist Hiroshi Yoshida blends traditional Western style and colors with Japanese techniques. His artwork started as oil and watercolor paintings, becoming notable when a renewed rise in the popularity of woodblock prints inspired him to produce numerous copies of the same pieces.

It’s not always easy to know the true value of your Hiroshi Yoshida artworks because there are multiple variations of each print on the market. The nuances of each piece are not easy to distinguish for most people, so an expert appraisal can help you determine the value of your art. 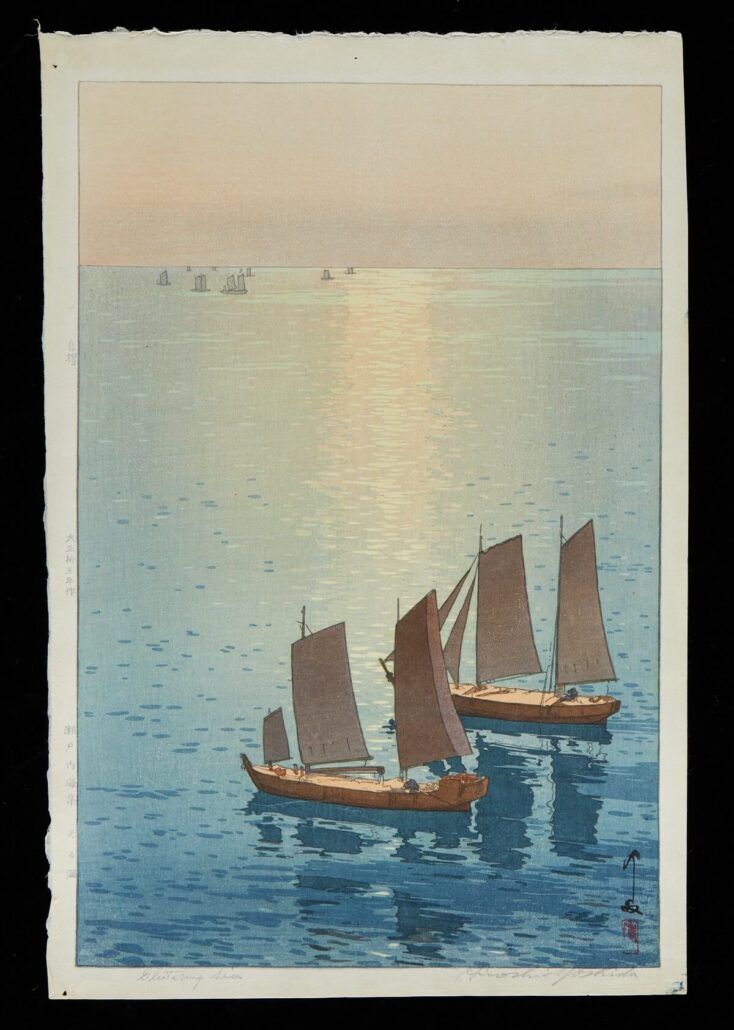 Who Was Hiroshi Yoshida?

Hiroshi Yoshida was born in 1876 in Kurume, Japan. Inspired by his father, a public school painting teacher, Yoshida’s skills and talent developed at a young age. When he was nineteen, Yoshida moved to Kyoto to study under Tamura Shoryu. One year later, Hiroshi moved to Tokyo to attend Fudō-sha, the private school of painter Koyama Shōtarō. In Tokyo, he further refined his talent for Western-style oil painting.

During his first U.S. tour in 1899, Yoshida noticed the Western market’s fascination with ukiyo-e, traditional Japanese woodblock printing and moved away from oil painting and watercolors to begin focusing more on woodblock prints. In 1925, Hiroshi Yoshida opened his studio. He would work here with designers, carvers, and printers to produce some of his finest works. Yoshida went on to become one of the most important artists in the shin-hanga movement, the early 20th c. revitalization of this historic Japanese printmaking tradition.

Yoshida’s involvement in every aspect of creating art placed him as the head of many collaborative spaces, like the sōsaku-hanga movement, in which artists singlehandedly designed, carved and printed their own pieces, as opposed to simply designing the works as had been common in earlier generations of woodblock print artists. In his later life, Hiroshi Yoshida enjoyed global fame, touring and exhibiting worldwide, until his death on April 5, 1950. 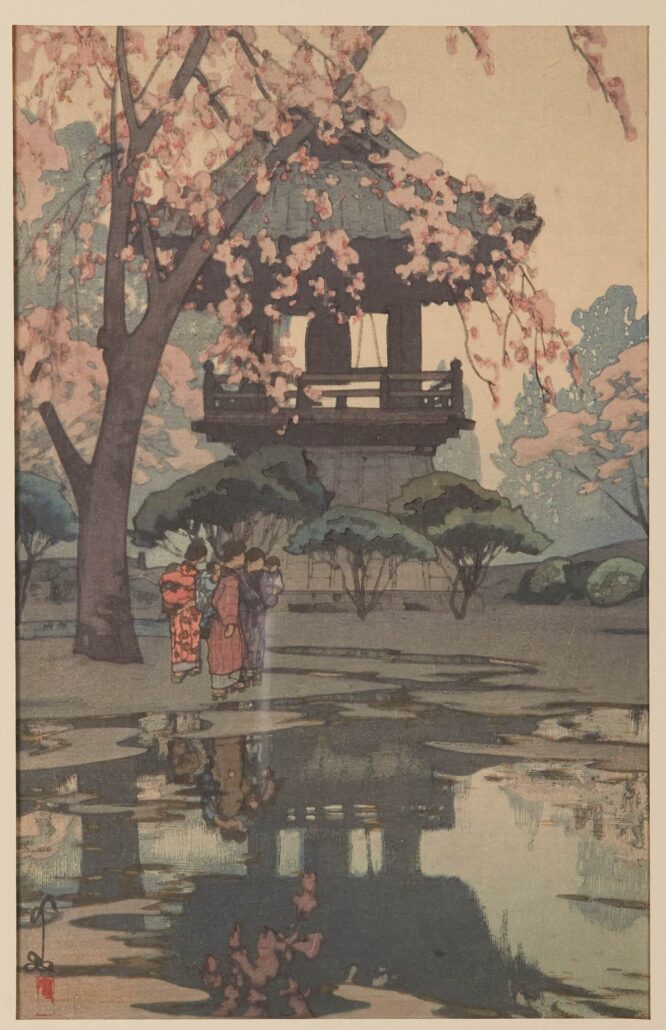 Yoshida, In a Temple Yard

What is the Artist Hiroshi Yoshida Known For?

Artist Hiroshi Yoshida had an innate ability to balance authentic Japanese imagery, culture, and techniques with the Western-style painting he had learned and developed over the years. His travels around the globe further gave Japanese artist Hiroshi Yoshida the confidence that his artwork was unique. The artist mostly combined traditional ukiyo-e subject matter, particularly landscapes, with the Western-style Impressionist sensibility for light, perspective, and mood.

Japanese woodblock printing originated in the Edo period (between 1603 and 1867) as a method to widely distribute writings, specifically Buddhist scripture. By 1765 new technologies allowed color to be added to the wood prints where previous artists would have to add them by hand. This led to the transition of text-based prints to prints of people, historical events, and landscapes that artists like Hiroshi Yoshida became known for.

What Mediums did Hiroshi Yoshida Use?

Although he is primarily known for his woodblock prints, Hiroshi Yoshida did not limit himself to prints on paper. His work includes marble sculptures, stained glass windows, and prints on silk instead of paper. Additionally, he used different types of wood – and not just the traditional cherry wood for his blocks. 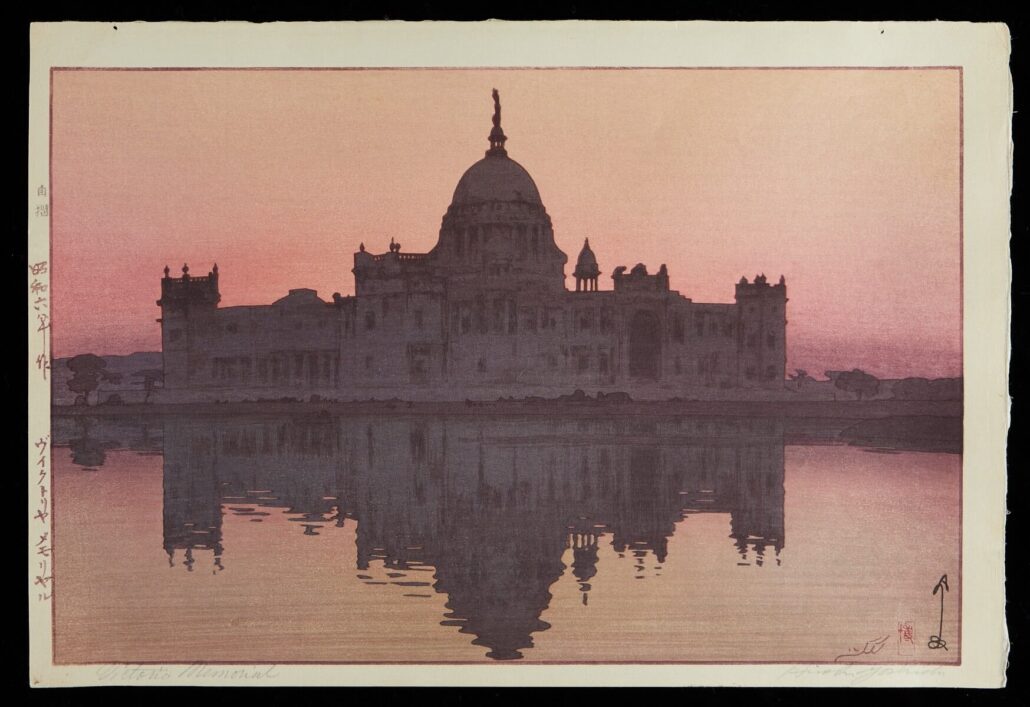 Noticing the Western market’s fascination with ukiyo-e during his first U.S. tour in 1899, Yoshida moved away from oil painting and watercolors and focused more on woodblock prints. In 1925, he opened his own print studio. 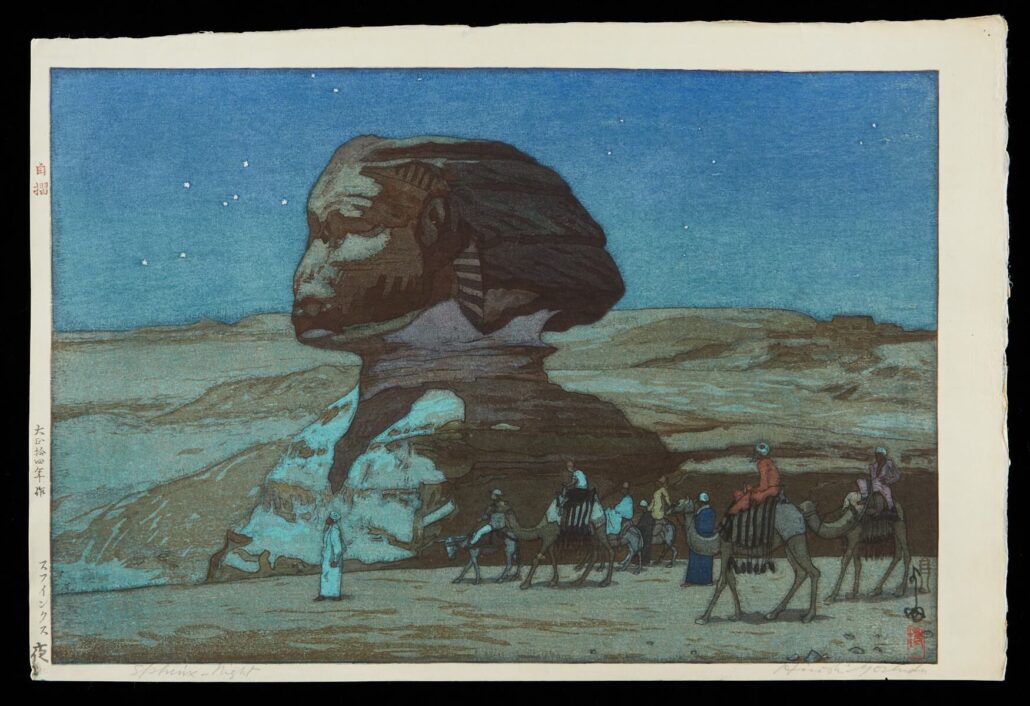 Unlike the ukiyo-e system, which relied on a clear division of work between a designer, a carver, and a printer, Hiroshi Yoshida still stayed involved in every part of the printing process. From designing to printing, picking the colors, and even carving some of the printing blocks, this connection and his talents as a painter and visionary can be attributed to the success and beauty of Yoshida’s works.

How to Identify a Hiroshi Yoshida Signature

Hiroshi Yoshida’s signatures differ depending on the number of impressions and the designated market. For example, some prints have Japanese signatures in sumi ink. On the other hand, the Hiroshi Yoshida signature is often in graphite and titled in English for the Western market.

Eventually, as demand grew, Hiroshi Yoshida prints were signed in the plate, which meant that the signature was carved into the wood block and stamped onto the print.

How Much is Hiroshi Yoshida Art Worth?

The value of Hiroshi Yoshida prints varies and can range between several hundred to several thousand dollars, depending on various factors. If you own a Hiroshi Yoshida work and want to know how much it’s worth, appraisals are done based upon the piece’s signature, size, and condition.

What Determines The Value of Hiroshi Yoshida Prints?

The type, signature, size, and condition of a Hiroshi Yoshida piece significantly impact the value of the artwork. The signature has a few varieties that help indicate when Hiroshi Yoshida produced an art piece. Prints with a bright red seal are considered the most valuable as they are very rare (since the majority of jizuri seals are stamped in brown and black). 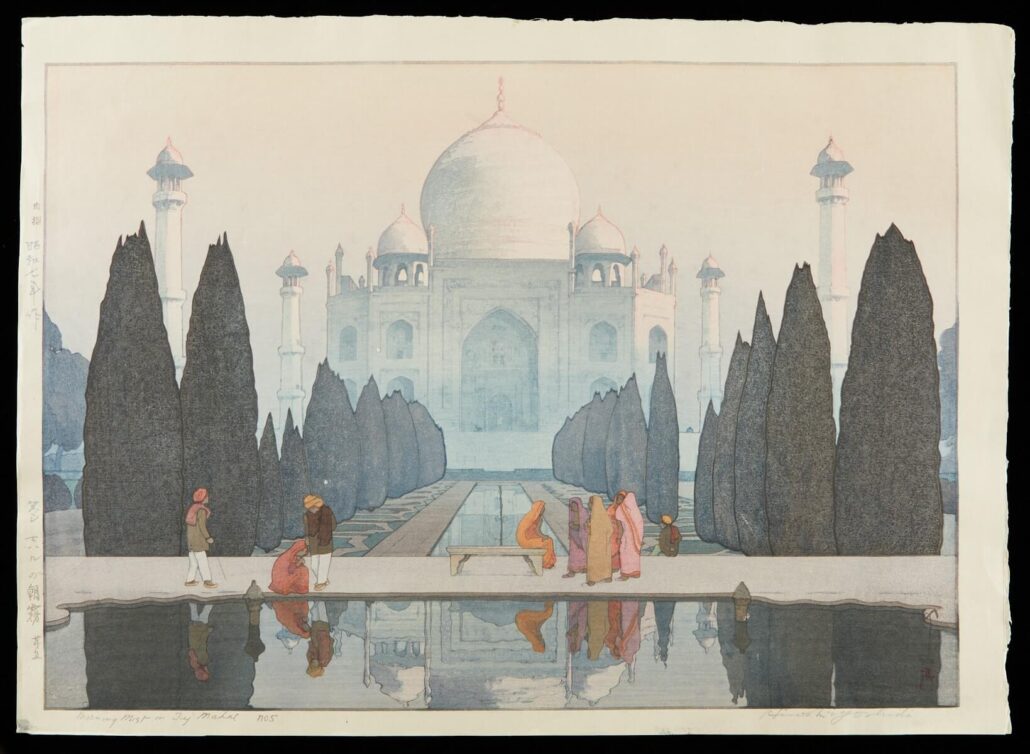 Certain kinds of damage can be repaired to restore the print. However, the restoration itself can reduce the price of a piece, so you should consult with an expert before deciding whether to restore and repair a print or just sell it as it is.

Do you have a Hiroshi Yoshida print? Revere Auctions can confirm its value and sell it at a top price.

Hiroshi Yoshida’s Japanese Woodblock prints are still famous today for their blend of Western style with Japanese hues and techniques. Here are a few popular pieces among the wide variety of oil, watercolor, and woodblock prints you can find today. 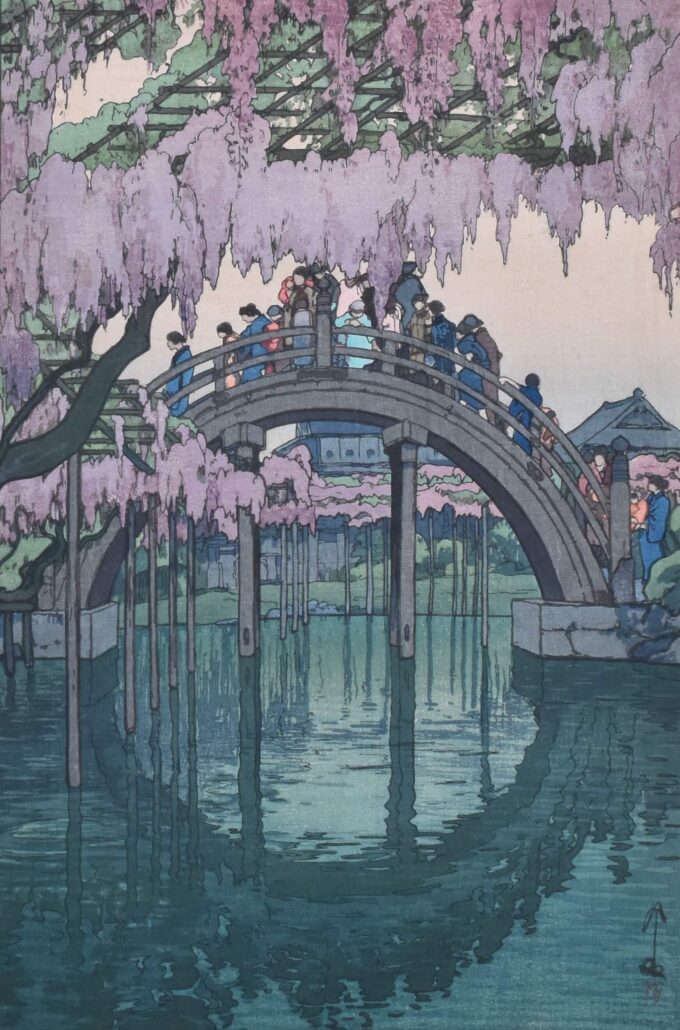 Grand Canyon is a bright and vibrant print measuring 11.5 x 16 inches. The bright blues and oranges add dimension to the canyon, while the deeper blues, greens, and grays enhance the contrast to give the impression that part of the canyon is illuminated in the sunshine.

The Kameido Bridge was part of a twelve-part series considered to be Hiroshi Yoshida’s masterpiece. There were 75 prints made of this scene, and it carries his trademark contrast of bright pinks and blues to darker hues.

This small piece measures 3 ¼ x 5 inches. Also known as Evening in Pittsburg, this Hiroshi Yoshida made this woodblock print in 1928. The subtle sky offsets the moody deep colors of the bridge and boat. The negative space created to represent fog is made more real with the warm, golden yellow lights that illuminate the boat and reflect off the water.

Hiroshi Yoshida, In a Temple Yard

The scenic view of In a Temple Yard captures Yoshida’s ability to balance color, form, and design with beautiful ease. The bright pink cherry blossoms and pink sky draw you in with shades of blue to add contrast to the background. The temple stands firmly in the center, but the women in bright kimonos draw your attention back to the foreground. Yoshida’s brilliant talent is apparent in the reflections we see in the pond that are just imperfect enough to make you believe the water can be touched.

Part of his earliest works, this painting of the United States landscape shows a mastery of color and realism that Yoshida is known for. This piece measures 15.5 x 21 inches and is one of his larger pieces. 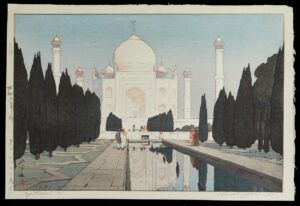 The Hiroshi Yoshida Taj Mahal pieces showcase some of the views that captured Yoshida’s attention during his travels during his career. The bright sun in India provides the perfect environment for Yoshida to balance the cool air that the trees and shadows can provide, with the Taj Mahal as the centerpiece that stands out ever so slightly. True to form, the people that artist Hiroshi Yoshida depicts wear bright colors to stand out and add more depth to the landscape.

How Can I Sell My Hiroshi Yoshida Artwork?

When preparing to sell a highly valued piece such as a Hiroshi Yoshida print, working with someone you can trust is essential. Many factors, such as knowing an artist’s style and history of their work, play a critical role in determining the value. Specifically, with Hiroshi Yoshida’s signatures and style, getting an accurate value will largely depend on the knowledge of an appraisal expert. The best way to find an appraisal expert is to investigate the numerous galleries and auctioneers across the United States that sell Hiroshi Yoshida artworks. Explore Hiroshi Yoshida Auctions.

Hiroshi Yoshida was a talented artist who found a way to combine the style and technique of traditional Japanese art with the colors and lines of Western painting. Taking his artwork from paint and paper to woodblock illustrated mastery in skills and talent that is still loved and renowned today. Revere Auctions is proud to sell Hiroshi Yoshida originals.

The Asian Art specialists at Revere Auctions are ready to help you understand the value of your Yoshida art. Do you have Yoshida artworks that need to be appraised? Our experts can evaluate your piece and issue you a certified document confirming its value. We can also help you unlock the door to a network of international collectors. Revere Auctions can navigate the selling process on your behalf, auctioning your art or prints off to the highest bidder – by making your artworks accessible to the most dedicated collectors worldwide. 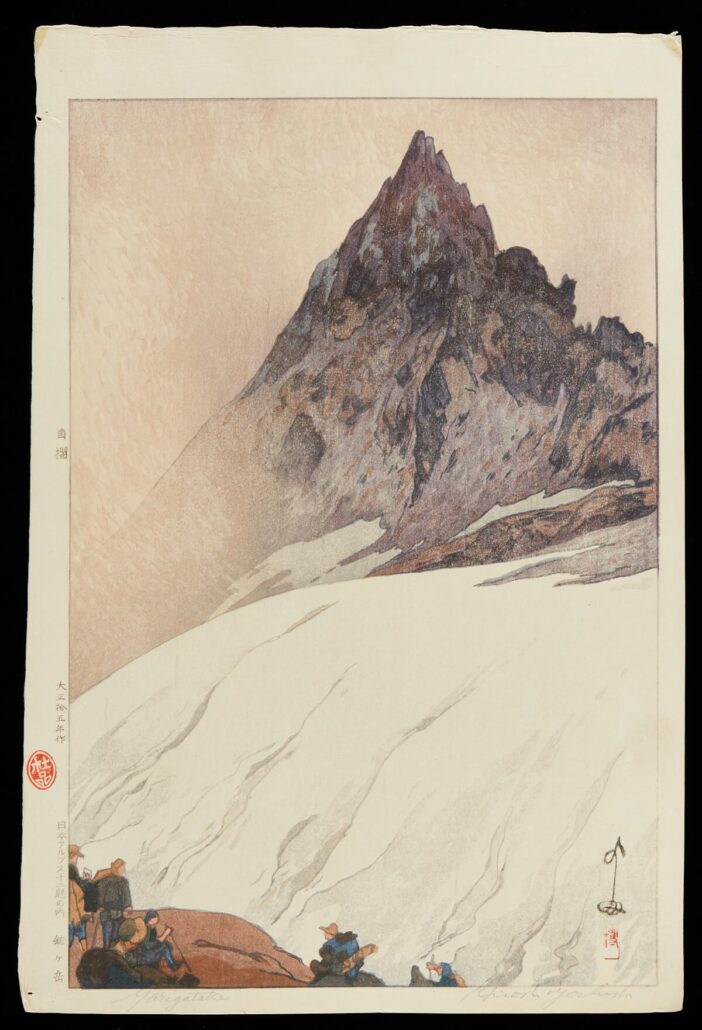 Similar to Hiroshi Yoshida, Hasui Kawase was a woodblock print artist during the sōsaku-hanga movement.

Another notable 20th-century artist known for his contributions to sōsaku-hanga and for being the first Japanese printmaking artist to win at the world-famous São Paulo Biennale in 1951.

It would be remiss not to bring up the legacy that Yoshida left behind with his family. His wife and children were inspired and taught by Yoshida to create their artwork.

Get in touch with Revere Auctions, today, to learn even more about Yoshida artworks and their value.